Thousands of people arrived at the Allen County War Memorial Coliseum  to see both Mike Braun, the Republican candidate running for Indiana Senate, and President Trump. Having the president come to Fort Wayne hasn’t happened since 1982 with Ronald Reagan.

The line to get into the Trump rally began in the morning of the event and kept getting bigger throughout the day. It took hours for people to even reach the door to the event.

Outside the event, Huntington University freshman and Trump supporter Ani Weitzel waited to get in.

HU students Becca Malott and BethAnn Bleemel also attended the event. The sophomores received an unexpected surprise once inside the Coliseum.

“So we were walking in and we were going to find a seat and a lady with a headset actually grabbed one of the friends I was with and she pulled us aside,” Malott explained.  “She’s like, ‘How’d you like to sit like behind Trump while he is giving his speech?’ and we were like, “What?! That’s awesome!”

Malott was pleased she got to be a part of the historic experience.

“Its been 30 years since a US president come to Fort Wayne. So the fact that we got to take part in that and be involved and be right behind the president was amazing,” Malott said.

FDN caught up with HU freshman Carlos Perez, who participated in the protest.

“Your vote matters,” Perez said. “You can change how our democracy works.”

A handful of Trump supporters stood on the opposite side of the road countering the protesters chants.  There were verbal disputes between both sides, but FDN did not witness any physical violence.

Both the rally and the protests were controlled by hundreds of SWAT officials, local law enforcement, and secret service members.

On Tuesday, the people of Indiana cast their votes. Republican Mike Braun won the senate seat with 54% of the vote. Republican Rep. Jim Banks won Indiana’s 3rd District with 65% of the vote.

Ben Schoch lost his bid for county council to Republican Tom Harris, who received almost 65% of the vote. 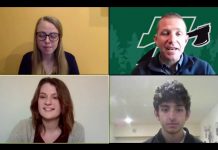 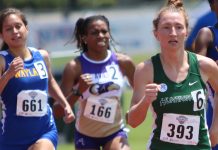