HUNTINGTON, Ind. (FDN) People from all over the world have gained huge followings on app’s like instagram and TikTok. Some even using the platforms to make money. Here at H-U, FDN’s Tyler Brown spoke with a few students that might come up on your “For You” page.

As tik tok becomes more of a dominating force on this campus, usually someone with a following like Anna Bowald is called an influencer and they can make some money while doing it. Anna had this to say on the matter:

“And that’s usually the average between 100-200 dollars per video for the sponsored post.”

Anna Bowald is one of the many called Influencers, while it’s surprising to have one on this campus Tyler Brown tracked another one down on campus, Travis Szelis.

“Yeah so i posted a video just recently that is now at 3 million views,” explained Travis.

Now while Travis has been seeing success with the platform as well, sometimes there are some up and downs in the life of an influencer

“Sometimes I get negative comments on my videos which can ruin my day,” lamented Travis, “maybe I will think a video is doing really well, it flops.

While yes there are many struggles in the world of being an influencer on tik tok, in the end the blessings far outweigh the burdens in their eyes, as Travis infers:

“People will be mean, people will be rude. but i think as long as your staying true to yourself, and making the content you enjoy, then there is no harm in it.”

Keep an eye out for your peers the next time you’re scrolling through TikTok. 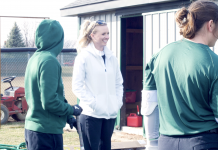 On the mound with Erin Rethlake, Huntington’s new softball coach