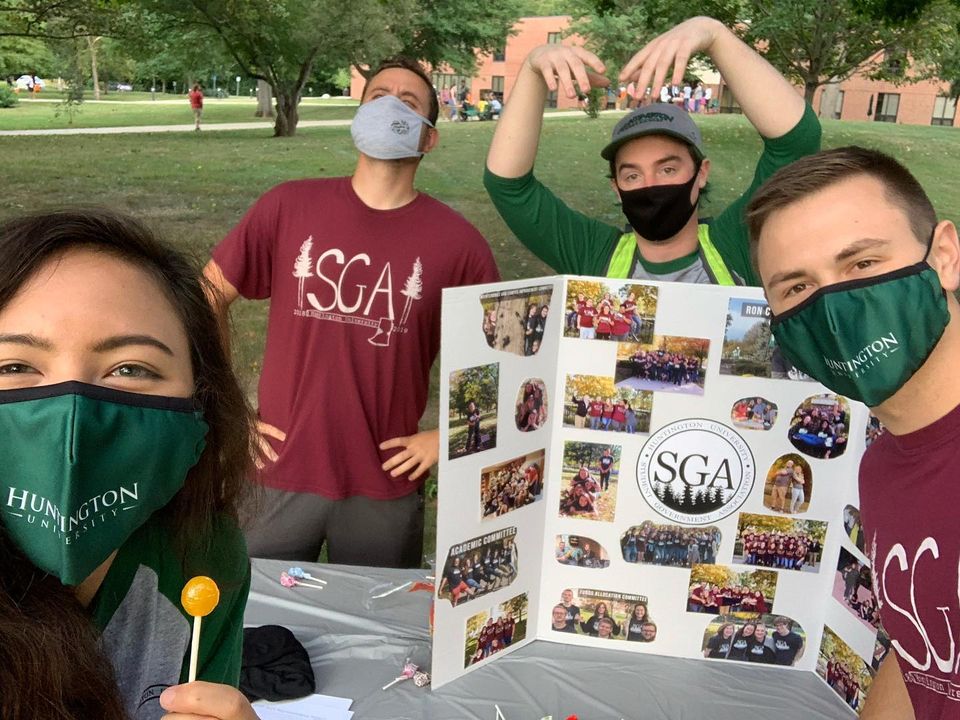 Huntington, Ind. (FDN) – The Fall Semester of the 2020 school year forced leaders to come up with creative solutions to problems that never landed at their feet before. Each person had to reach out of their comfort zones to adapt to current circumstances, while juggling the responsibilities already at their feet.

“We had to think outside the box and break away from the norm and what we did every other year.” Said senior history, political science, and philosophy triple major and SGA president Ashley Spirek. “This has yielded some of the most creative energy we have ever had.”

After running a dining-based campaign on a restriction free campus, she was sworn in on the virtual Forester night with the job of advocating for a student body that had no idea when they would be re-united.

Once elected, the SGA President has several responsibilities that they must fulfill. They reside over the entirety of SGA, along with playing a direct role in event planning. The most prestigious of these is the ability to serve as the voice of the students on the HU Board of Trustees. This provides a more specific way to enact communication between the administration and the needs of the students.

When reflecting on her first semester, Spirek expressed feelings of success, with one moment specifically standing out.

“The biggest moment of success has been the planning of ACOC [All Campus Off Campus]” Spirek said. “We had to completely redo how we plan that entire event, but we wanted to stay consistent with the vision of creating a space where students could get to know each other.”

With the pandemic posing obvious logistical problems of organizing a large mass of Foresters in one location off campus, Spirek and the rest of SGA put their brains together and came up with a solution. The result was a Mexican food truck with all food expenses for students paid for on the Quad. With an approximate turnout of 200 students, SGA had created a fun event that accommodated a large mass of students, while keeping everything within the campus regulations

In looking to the future, Spirek wants to continue empowering the other members of SGA to continuing advancing the student experience and to better foster stability in campus. Her biggest wish for the role would for it to increase in interest and more of an audience.

After serving a year as the Meadows Hall Representative, Spirek ran for president uncontested. This lack of competition is common for the SGA executive position. In addition to this are the lack of students that approach the president to provide suggestions.

“I think student government is probably the most effective way to make your voice heard.” She explained when asked about the administrations relationship with SGA. “You are respected for your positions and your thoughts are taken into consideration.”

An example of this is when the Dining Commons resorted to plastic plates and cases to keep students safe from COVID-19, it became clear that the school was beginning to use a gigantic amount of plastic. SGA brought the idea of recycling bins in the D.C. to the administration and the idea materialized.

With weekly open hours in her office in the basement of Livingston, Spirek gladly welcomes the HU student body to come and share their comments and concerns about campus life. Idea’s about student life, academic concerns, and safety concerns all fall into her realm of influence.

“Our vision for the rest of the year is to foster a sense of stability and consistency in campus life during a time that is very inconsistent.” Said the SGA President. “That was our goal last semester and that is our goal this semester.”